I have just returned from spending a little time in a California desert. The Sonoran desert around Palm Springs.  I went to the Salton Sea too.

People say the desert is empty. Who these people are I don’t know.

San Jacinto Peak looms over Palm Springs, its 10,000 feet seeming to stare down at the city’s frivolity.

‘From the summit of San Jacinto one has to my notion the finest outlook for unstudied comprehensiveness in all of California. One can see great distances in every direction. The mountain ranges succeed one another northeastward but one can not only overlook them but detect the vast mesas and desert plains which lie between them. And the highest range in the distance which finally shuts out the view is so far away that it gives no sense of dissatisfaction or complicating of a problem which one desires to solve as in the case of a range near at hand closing the immediate view as in the Sierras. Everything is understandable, comprehensible, to be worked out readily with the eye. ‘

There are limber pines (Pinus flexilis) and Sierra lodgepole pines (Pinus contorta subsp. Murrayana) and all manner of plant wonder on the mountain. Interestingly, at least to me, San Jacinto is the Spanish name for Saint Hyacinth, a Polish friar who was canonized in 1594. Who knew ?

Thanks for the memory
Of sentimental verse,
Nothing in my purse,
And chuckles
When the preacher said
For better or for worse,
How lovely it was.

Thanks for the memory
Of Schubert’s Serenade,
Little things of jade
And traffic jams
And anagrams
And bills we never paid,
How lovely it was.

We who could laugh over big things
Were parted by only a slight thing.
I wonder if we did the right thing,
Oh, well, that’s life, I guess,
I love your dress.

Thanks for the memory
Of faults that you forgave,
Of rainbows on a wave,
And stockings in the basin
When a fellow needs a shave,
Thank you so much.

Thanks for the memory
Of tinkling temple bells,
Alma mater yells
And Cuban rum
And towels from
The very best hotels,
Oh how lovely it was.

Thanks for the memory
Of cushions on the floor,
Hash with Dinty Moore,
That pair of gay pajamas
That you bought
And never wore.

We said goodbye with a highball,
Then I got as high as a steeple,
But we were intelligent people,
No tears, no fuss,
Hooray for us.

Strictly entire nous,
Darling, how are you?
And how are all
Those little dreams
That never did come true?

Awfully glad I met you,
Cheerio and toodle-oo
Thank you,
Thank you so much.

The gardens of Sunnylands are new,  created in 2011 by landscape architect James Burnett. It is refreshing to observe that not every 21st century garden is a cultivated wildness.   http://sunnylands.org/

This is a formal garden with rows and rows of golden barrel cactus (Echinocactus grussonii), Morroccan mound (Euphorbia resinifera) and Artichoke Agave (Agave parryi var.truncata), with pink donations of Hesperaloe (Hesperaloe funifera hybrid) and white offerings of Our Lord’s Candle (Hesperoyucca whipplei).Like a sleeping army they are ranked in lines, some straight, others bowed. 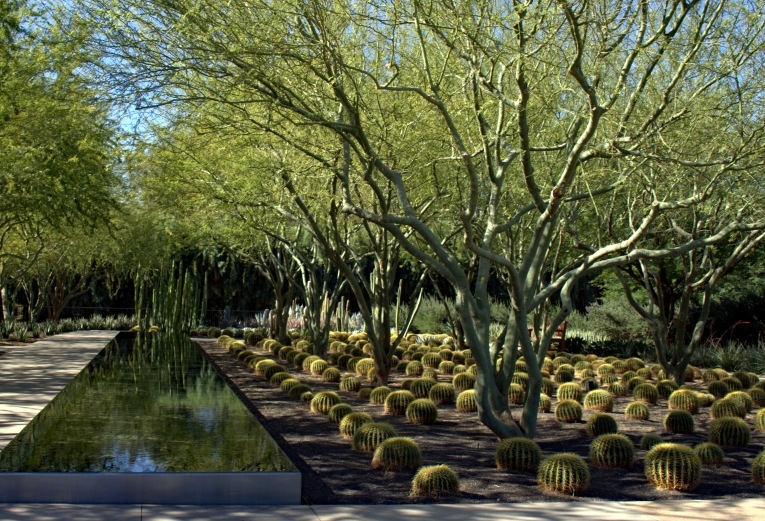 There are avenues of the most wonderful desert tree, Parkinsonia x ‘Desert Museum’, a selection of palo verde that flowers in spring and summer. Have mercy, this tree is so beautiful.

To the south of Sunnylands  is the great Anza-Borrego desert and to the east the Salton Sea. The Salton Sea has such a rich history of hope, decline and fall.

It is not a sea but a land-trapped lake. Saltier than the ocean and full of agricultural run-off, it was once a resort. Now it’s full of selenium and other heavy metals. In the winter it is a stop-over for migrating birds, thousands of them.

It is one of my favorite places in the U.S. Cracked by the sun, ruined by poison, devoid of hope.

Tilapia, that tasteless fish, was introduced into the Salton Sea. There are now hundreds of thousands of them. So many that, twice a year, they die off, making a wall of dead fish around the lake. A beach of bones.